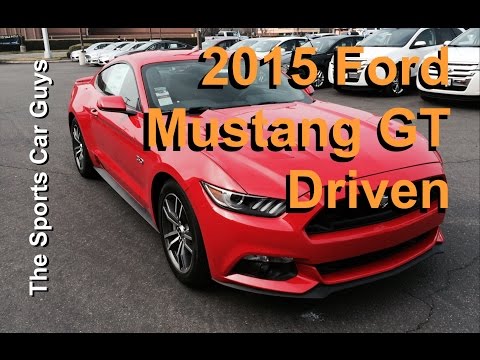 The 2015 Ford Mustang GT is quite a car. The American muscles car is powered by a powerful 435 horsepower V8 engine. More importantly, the new generation of the Mustang is the first to have an independent rear suspension.

For years Ford used a solid rear axle on their pony car. The American automaker managed to make the setup work decently, but it still left something to be desired when being driven hard in a corner.

The GT gives a small taste of what the Shelby GT350 will be like. Although that performance machine looks like it will be able to compete with some much higher priced cars. The GT offers plenty of thrills and the sound of the exhaust alone will sell plenty of these machines.

With over 400 horsepower and a starting price of just over $30,000, the ‘Stang GT is quite the V8 muscle car bargain. Plus with the improved handling it should make a great track day vehicle.

We were able to get our first drive in a 2015 Ford Mustang GT. In this video we take the car on a road test and see how well it can push you back in your seat. We then give our opinion on if the GT is a good car and talk about how it feels to drive.

The car was provided by the folks over at Lithia Ford Lincoln in Fresno, California. They have quite a selection of Mustangs and were very helpful in getting us one to drive.