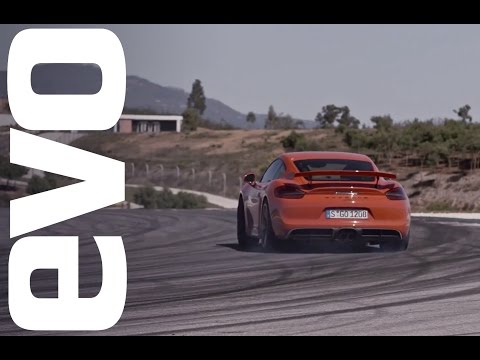 The Porsche Cayman GT4 looks to be the track focused mid-engined sports car that folks have been wanting, for quite some time. It has performance and power to rival the 911 Carrera S and it has better suspension and brakes thanks to much of that being from the GT3.

With the mid-engined layout the balance is very neutral and with the six-speed manual, the driving experience is what you want from a high performance Porsche. Beyond all the go fast goodies it has a more purposeful look than even the Cayman GTS.

Click past the jump to read more about the GT4 and to see a video of it on the Portimao Circuit.

The GT4 is the best Cayman yet. It isn’t quite the hard core machine that a GT3 is, but it is a much more approachable machine. With a 385 horsepower 3.8-liter flat-six engine from a Carrera S, it has the power of a 911.

Reports are that Porsche will be making a GT4 RS. While we don’t know the specs yet, it is easy to think that it would use the engine from the 911 Carrera GTS. That machine has 430 horsepower, but expect for the GT4 RS to have more like 420.

Check out this video of the Porsche Cayman GT4 being driven on the Portimao Circuit in Portugal. Watching the purpose built Cayman on the circuit shows just how, if you buy one, you have to go on at least one track day.