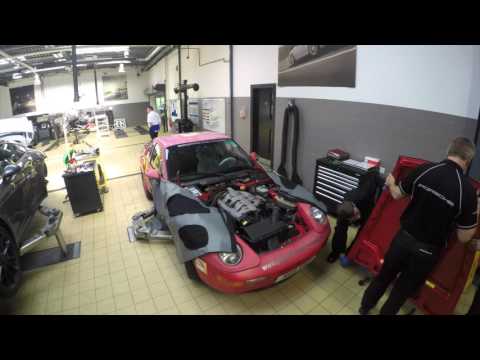 The Porsche 968 Club Sport is the track focused version of the German performance car maker’s last front-engined four-cylinder car. The car is powered by a 3.0-liter inline four-cylinder engine. To keep the handling neutral the transaxle is located at the rear making for near perfect 50/50 weight distribution when coupled with the front engine.

The Club Sport is a 968 that has gone on a diet with things such as the rear seat, air conditioning and electric windows removed. The suspension was reworked for the track which lowered the 986 by 10mm over the stock machine.

On the track the 240 horsepower was enough for plenty of fun. Add that power with the 220 pounds of weight reduction and you end up with a sports car that can launch from 0-60 mph in 6.1 seconds. That may not sound that fast today, but in the early ’90s that was plenty quick.

This video shows the first phase of the restoration of a 986 Club Sport. The footage shows the well balanced track ready performance car as it prepares for an engine and transmission rebuild and to get new paint.