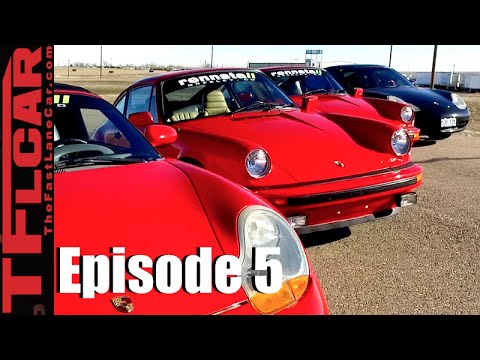 Most Porsche enthusiasts would give up their left thumb for a chance to drive a 911 SC, 930, 996 and 986 Boxster back to back on the track. The folks over at Fast Lane Cars got an opportunity to do just that as they compared two of the cheapest Porsches on the market today with two classic cars that have a much higher market value.

The 986 and 996 have the advantage of newer technology when compared to their 80’s siblings. The 911 SC and 930 are iconic cars that take you back to a time when driving was an analog experience. The older cars are also lighter packages with a much sought after air-cooled power plant.

The early Boxster is an incredible value in the Porsche world with good examples available for as low as $5,000. The 996 variant of the 911 is possibly the best value in the 911 market place right now. Early 996s can be found in good condition for as low as $15,000. Both models do have known issues, one of the biggest of which is the Intermediate Shaft (IMS) Bearing. All of these known issues have relatively easy resolutions or preventative measures.

The 911 SC and turbocharged 930 are much more expensive. The SC offered 180 horsepower from an air-cooled flat-six engine which wasn’t bad for its day. You can find 911 SCs in good condition for about $30,000 and values are likely to continue to rise. The 930 is a blue chip 911 investment. The mid-80’s 911 Turbo (930) offered 282 horsepower from its air-cooled turbocharged flat-six engine. Still being in the early days of turbocharging it had good power for its time, but also had a decent amount of turbo lag. A mid-80’s 930 will now run you about $100,000 for a car in good condition with prices guaranteed to keep rising.

This video shows all four cars as they are driven on the track one after the other. It shows the Porsche’s taking a circuit with a good amount of curves and then finishes with a drag race. Scroll down to let us know which you think will be the fastest in the comments and then watch the video to find out how they stack up from a pure performance stand point.