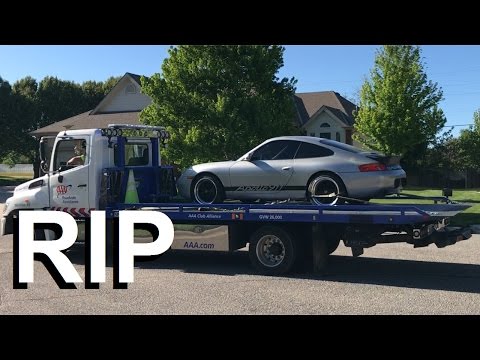 240,000 miles is a lot on just about any car, but on an early 996 generation Porsche 911 it is not too common. Because they have gone down in price, maintenance is often deferred resulting in major mechanical trouble before you hit the 175,000 mile mark. If we’ll maintained and the IMS Bearing is addressed, they can stay on the road for a long time.

All of this isn’t to say that a 996 isn’t a well made car. It is. However, to keep it on the road requires that you keep up on wear items and don’t let things slide. Otherwise, what would have been a fairly manageable repair bill can turn into a small fortune.

Of course if you get to almost 250,000 miles there are some things that you just shouldn’t do.

One of them is taking it on the track without proper measures to avoid oil starvation. If you plan on cornering hard, then upgrading the lubrication system is a good idea. The 3.4-liter engine has known issues with loosing oil pressure with repetitive laps, but there are solutions that can help with this.

The higher output Mezger engines used in the GT3 and turbocharged 996 models do not have this issue. The later 3.6-liter engine used in the standard 996 also appears to be less susceptible to oil starvation during hard cornering. Having said this, lubrication upgrades can be made to these power plants as added insurance.

This video shows you what not to do with your nearly 250,000 mile 996 generation Porsche 911 Carrera. After you see what caused the original problem (and yes it involves a track day and oil starvation) you get to see what happens when you don’t quickly take care of the issue. The car can still run for a while, but it is now a ticking time bomb and you just don’t know how much more time the engine has left.

Check out the video and then scroll down to the comments to let us know what you would do in this situation. Also, let us know if you would rebuild the engine (costs about $10,000), get a used replacement engine updating wear items (costs about $7,000) or do an engine swap with a Chevy V8 (after everything is installed it will cost about $25,000).