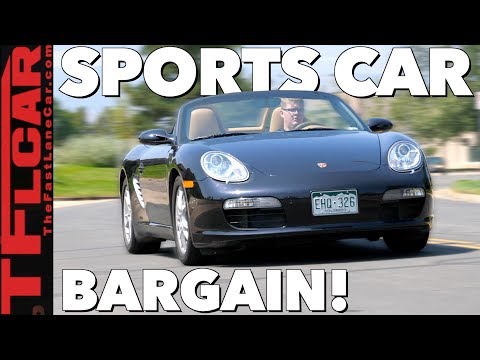 The 986 generation Porsche Boxster is possibly the best value in the current sports car market. This will likely be the case for the next 5-10 years, but the 987 Boxster and Cayman are starting to get down to the extreme bargain level.

The 987 Boxster represents a big update for the roadster. One big styling update is the use of more rounded headlights, replacing the controversial fried egg headlights.

The other big upgrade is the quality of the interior. One of the 986 Boxster’s biggest letdowns was the interior as it used a lot of plastic. Compare it to other interiors of the late 90’s and it holds up pretty well, but as time has gone by interiors, even on inexpensive cars, have improved tremendously. The inside did improve some in the 2000 model year, with the addition of the S model, but the 987 is still a huge jump from that.

The first Cayman was introduced as a 987 and provides a bit more punch than the Boxster of the same year. Many prefer the look of the hardtop, but you do loose the option to let the wind flow through your hair.

However, the low end of the price range will increase the likelihood of higher priced repairs in the near future. Because of this it is a good idea to raise your budget between $15,000 and $25,000. Doing so even brings higher mileage Cayman S vehicles well within your reach, but lower mileage examples will fetch around $30,000.

Of course that is the current state of things and it is likely that these are not yet finished depreciating. While they may never hit quite the low of the early 986, within the next 5-10 years prices around $10,000 for early 987 examples seems very likely. We think this makes it a car to keep an eye on if you are thinking of adding one to your garage in a few years.

As with any used Porsche should you decide to go for a 987 Boxster or Cayman a pre-purchase inspection is a very good idea. Having a mechanic familiar with the 987 take a close look at it can help bring to light potential issues. Be patient and find the right example and you can experience driving fun for years to come.