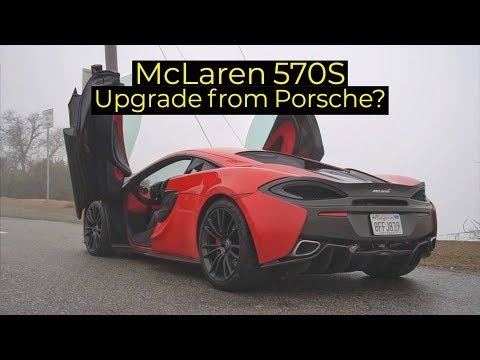 The McLaren 570S is the most affordable new super car that you can purchase from the British performance car maker available in our country. With a starting price of $188,600, it competes with the Porsche 911 GT3 RS that starts at $187,500.

From a price stand point just about a $1,000 separates the two, but is the McLaren actually a step up?

From a looks stand point, both cars stand out. The 570S has supercar styling that will bring out plenty of cell phones wherever you drive. While the 911 GT3 RS has the same basic shape as other 911s, the large rear wing and front fender fins will draw more attention than an ordinary 911.

From a performance stand point the two cars are very close. The 570S takes 3.1 seconds to go from 0-60 mph versus 3.0 seconds for the GT3 RS. From 0-124 mph the Porsche 911 GT3 RS takes 10.8 seconds versus 9.5 seconds to hit the same mark for the McLaren 570S. The two cars are pretty neck and neck at legal speeds, but the McLaren starts to pull away beyond that.

Long term maintenance of either car will be expensive, but expect for the McLaren to cost a bit more. Another thing to consider is that there are quite a few more Porsche dealerships in the US than McLaren dealerships. The same goes for independent shops that specialize in one make or the other.

What do you think? Is the McLaren 570S an upgrade over the Porsche 911 GT3 RS? Scroll down to the comments and let us know what you think.