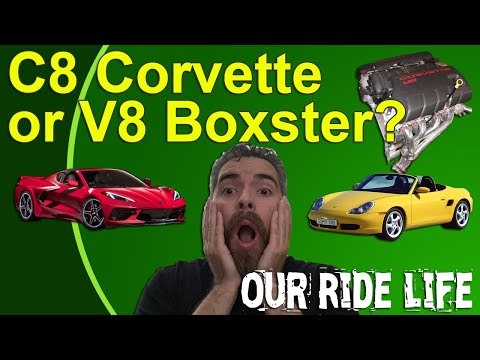 The C8 Corvette has been one of the most talked about cars of the year. The fact that GM is finally moving the engine to the middle of the new Corvette after decades of rumors.

The newest ‘Vette is aiming squarely at the 992 generation Porsche 911. It promises to best its German competition in both performance and price.

However, you can expect some growing pains as the C8 will be the first time that the Corvette has gone mid-engined. Porsche has a long history of mid-engined vehicles. In fact the very first road car produced under the Porsche marquee had the engine in the middle.

While for a bit subsequent Porsche road cars had the engine behind the rear axle, race cars like the 550 Spyder, 904 and 917 proved that it was a winning layout. Porsche would eventually sell mid-engine production road cars such as the 914, Boxster and Cayman.

Since Porsche is more experienced with the mid-engine layout, it begs the question of why not just stick to Porsche. Of course the performance figures of the C8 are better than what a Boxster or Cayman offers, which opens the idea to an engine swap.

One such possible swap is to take a Porsche 986 Boxster S and put a Chevy LS V8 engine in the middle. Renegade Hybrids is one company that makes a kit to allow the swap.

While it would get negative comments from many Porsche enthusiasts and it would still end up costing about $30,000 (including the purchase of a 986 Boxster S with a blown engine), the performance would rival the C8 and it would cost about half the price of a new Corvette.

Of course you could get similar performance from a 3.8-liter flat-six swap into a 987 Boxster S. However, that would end up getting you much closer to the price of a new C8.