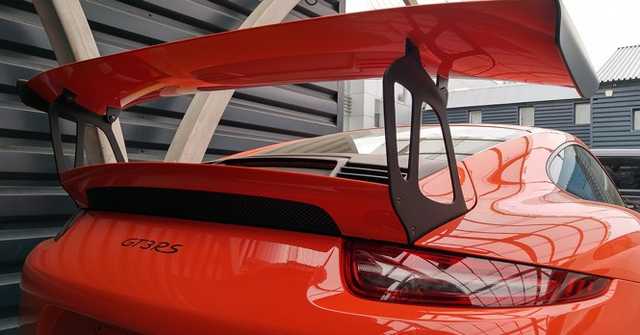 There is no debating that the Porsche 911 GT3 is an iconic racing car, and since its inception in 1999 it has spawned many different variations for road and track, including the 997 GT3 RS 4.0 and the 991 GT3 – both excellent cars in their right, but which one is right for you?

When choosing between the two Porsches, appearance doesn’t play much into the decision, as they look identical at first glance. There are subtle differences though, for example, the 991 is 2.2 inches longer than the 997, the front track two inches wider, while the wheelbase is increased by four inches.

The roofline of the 991 is lower, with a more heavily raked windscreen that makes the bonnet appear slightly shorter. The 991 also has slightly raised rear quarters and slimmer brake and side lights, while the headlight glass is more raised and wraps itself around the wing. These are subtle differences, but things a Porsche enthusiast will want to take note of.

In terms of comfort, the 991 comes out on top here, with a more spacious cabin that offers better shoulder room, increased space in the rear of the cabin, and a deeper boot at the front thanks to the new chassis. The 991 also boasts a plusher interior that is less susceptible to wear – a common complaint about the 997 – and features the 997’s optional sports seat as standard (described as firm yet supportive), and has electrically assisted steering with a flatter, wider steering wheel.

The 991’s dash is very similar to the 997, although the sat-nav screen is larger and better positioned. The 991 also features a ‘corporate’ raised centre console housing the gearshift, and the handbrake is replaced by an electric parking brake – more traditional car enthusiasts may turn their nose up at this, while others will welcome the newer tech. On the upside though, the road noise in the 991 is less intrusive in comparison to the 997.

It’s time to get into the nitty gritty and talk power. Both Porches boast some of the more powerful naturally aspirated six-cylinder engines in the list of the best Porsche models ever produced, with only minor differences in power output. Although the 4.0-litre 997 has a slight edge over the 991’s 3.8-litre displacement, which cranks out 475hp @ 8250rpm against the 997’s 493hp at the same revs, both engines produce 125hp/L.

Now, here’s where it’s a matter of preference: the age-old manual vs. auto argument. The 997 offers a traditional six-speed manual, while the 991 generation GT3 is only available with a seven-speed Porsche Doppelkupplung (PDK) transmission – which means the 991 will be out of the equation for those who insist on doing their own shifting. However, there is definitely something to be said for the PDK transmission and its ability to change gears ultra-smoothly in fractions of a second.

When it comes to handling, the reworked front and rear suspension and wider track of the 991 delivers more refinement than the 997, while the new electro mechanical steering serves to dampen a lot of the vibration and feedback, which only adds to the refinement – however, those who prefer a more traditional driving experience will miss the feel of the hydraulic steering wheel in the 997.

Of course, car you decide on also depends on how you plan to use it. The 997 isn’t ideal for driving around in city traffic – not only do you have a manual gearbox and slick tyres that belong on the track, but you will also need to be very mindful of the front splitter. After all, who wants to scrape a 150K car? The 991, in comparison, has a front axle lift kit, which makes it easier to get around in territory that’s less than ideal for a sports car. Essentially, the 997 is the sort of car you want to drive hard – not do the grocery run in.

So, what’s the verdict? Essentially, the 997 is more of a ‘special occasion car’ – one you reserve for track, or take for a spirited weekend drive. The 911, in comparison, can be used in a wider context and is more road friendly.

One isn’t necessarily better than the other – what you choose will depend on what you like. The Porsche 991 GT3 is more tech savvy and road friendly, ideal for those looking for a bit more refinement in a daily driver or a car for cruising, while the Porsche 997 GT3 RS 4.0 GT3, which is more traditional and perfect for track, will undoubtedly satisfy the hard-core rev heads.