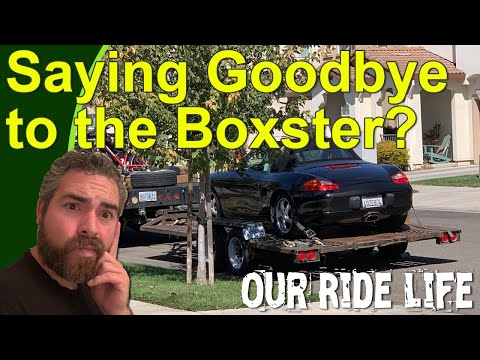 If you’ve followed this blog for a while then you probably already know that I have owned three Porsches so far. The first was a Porsche 924, followed by a 944 and finally a 986 Boxster.

I only had the 924 for about two years (it was a running restoration project, purchased for just $200) and had the 944 for over 5 years. The Boxster has been in my garage for the past six years.

But, all good things must come to an end and as always, it is a bitter sweet experience to sell a Porsche that you’ve enjoyed for over half a decade.

After owning the Boxster with only minor issues, the Porsche started to steam through the passenger side air outlet. After further investigation, a coolant leak was found. The issue was likely easily repairable, but I like to fix the other, “while you are in there”, type of things.

While I was getting ready to order parts and figure out when I would have enough time to work on the car, my wife got me thinking. She asked if this was a car I wanted to keep for a long time or if it would be a good time to sell it and move to the next.

After much deliberation, I decided that, while I liked the idea of eventually swapping the engine for a 996 sourced 3.4-liter power plant, when I added everything up that I wanted to do, it would cost less to simply buy a 911. Because of this, I decided that I would start shopping for my next Porsche.

In getting the next sports car, I’m now going between a 987 Cayman S, an early 996, a 996 Carrera 4S or a 997. Now for the tough job of shopping and test driving some wonderful Porsches.

For more details about saying goodbye to my dependable 986 Boxster check out the video below. After watching it scroll down to the comments and give me your thoughts on what I should buy next.