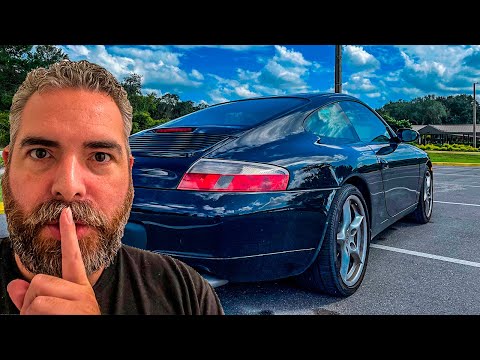 The Porsche 996 is currently the most affordable generation of the 911. Prices of early 996s are especially low when compared to later examples.

The thing about the early cars is that they have a few things that in the future may turn out to be desirable. Namely the fact that they have a more durable dual row IMS bearing and a cable driven throttle body.

Since selling my dependable Porsche 986 Boxster that I owned for over six years late last year, I had been searching for the next Porsche. I wasn’t going for the cheapest 911 or Cayman S, but this 1999 996 was priced so low that I couldn’t resist.

This particular car was originally being sold for $16,000 by a Lexus dealership in Monterey, California. Contacting them over the internet I was able to get the price to $14,500. But, the negotiation did stop there. After some back and forth helped by financing the car (which I was already planning to do and then pay off the car early) I was able to purchase it for just $12,500.

That made this 996 the cheapest Porsche 911 Carrera Coupe in the USA with under 100K miles on the odometer and a clean title at the time of purchase.

Of course for that price you won’t get a perfect car. It does have some minor cosmetic issues, such as a few small dents and the need for some paint correction. However, with some paint-less dent removal and then a good polish and wax, it should start looking pretty good.

The other main reason for the lower price is the transmission. It uses a Tiptronic S instead of the six-speed manual unit. This does change the driving experience and reduces the quickness of the car.

On the track, multiple magazines in the late 90’s managed a 0-60 mph time of 4.9 seconds with the manual transmission. The same magazines managed a 0-60 mph time of 5.6 seconds when fitted with the Tiptronic (this was done in manual shift mode and 5.7 seconds was achieved in full automatic mode). While this isn’t blazingly fast it is still pretty good for the vintage. Thanks to the automatic transmission this is also a time that can be duplicated much easier, even if the driver lacks skill.

While the transmission does reduce the involvement a bit, in the real world and on the track with an average driver the Tiptronic S offers similar performance to the six-speed.

This video gives more details about the Porsche 996 and the purchasing process during the COVID-19 pandemic.