The Pagani Huayra has sold out of all 100 examples that were to be produced. Unlike the Zonda the Huayra has not yet been released as a special edition (at least outside of China). But that is about to change.

Pagani will release a special edition roadster and coupe version soon. Not much is known about either just yet, but there have been recent spy shots of the coupe.

END_OF_DOCUMENT_TOKEN_TO_BE_REPLACED

Patrick Dempsey is a pretty big TV and movie star. He has also become a very good racing driver, currently racing the Dempsey Racing #58 Porsche 911 GT America in United Sportscar Racing and the #77 Porsche 911 RSR in the Worlde Endurance Championship (WEC). In fact his competing has become more of his passion as of late.

But how hard is it to balance such busy schedules and make sure to do both? On a given weekend he can be shooting an episode of Grey’s Anatomy in the states and then need to fly to Europe for a race, then potentially start the cycle all over again.

Click past the jump (or scroll down if you came directly to the full article) to see just how busy Mr. Dempsey is balancing his racing and film life.

END_OF_DOCUMENT_TOKEN_TO_BE_REPLACED

Bugatti Veyron is a 250+ MPH Supercar

The past few decades have brought automotive technology and performance to amazing new heights. From the humble beginnings of cars like the Bentley Speed Six in the 20s to high performance classics like the Lamborghini Countash, the unbelievable supercar has grown into a truly astonishing class of vehicles.

Here are three supercars that will forever be considered “best in class.”

Hailing from Italy, the Pagani Zonda S is one of the most revered modern supercars. It was produced in limited quantities between 1999 and 2011, and its performce is jaw-dropping. It can slingshot from 0-60mph in just 3.7 seconds, and its top speeds exceed 200mph.

Although it missed out on attaining the title of “world’s fastest supercar” by failing to satisfy a few measly technicalities (The Guiness Book of Wold Records requires at least 30 models to be manufactured for a car to be considered), the Hennessey Venom GT is probably the fastest car in existence today. It has a blazingly fast top speed of 270.49mph, and it takes just 2.7 short seconds for the car to go from 0-60mph!

Since the Hennessey Venom GT doesn’t exist in more than 30 models, the Bugatti Veyron is standing strong as the world’s current fastest car. But its performance isn’t anything to be sneezed at. It comes pretty close to equaling the performance of the Hennessey with a top speed of 267.85mph. Interestingly, it’s also one of the few supercars to be manufactured in France.

Want to know more about the incredible supercars produced over the past century? Check out the graphic below.

Do you have a cool car? We would love to share it as well as a bit about its owner with our readers. No matter if it is a classic ride, a stock exotic or a modified street car, we are always looking for interesting cars to write about.

We also know that often it is the man behind the car that adds extra interest. Because of these we may interview owners and if the car is close enough to our office in California, we may even meet you in person to write about your car. In some cases we may even film a short video of us riding along with you in the car and talking about it.

So, click here to head over to the forum section and let us know a bit about your ride. To share about your car you don’t even have to register an account, but doing so will make any future posts easier for you. 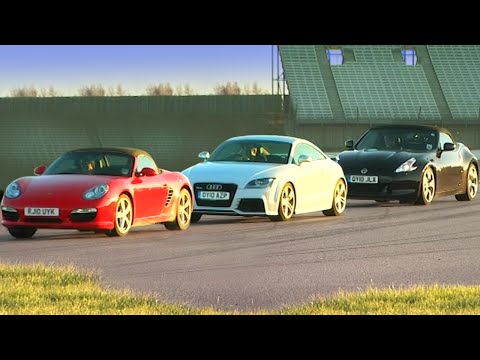 The Porsche Boxster S, Audi TT RS and Nissan 370Z are all very good pure sports cars. The Porsche and Nissan are traditional real-wheel drive vehicles and the Audi is an all-wheel drive machine, potentially giving it more traction.

The Boxster takes a lighter weight approach than the other cars and its mid-engine design gives it very neutral handling. On the other hand the TT RS and 370Z offer a bit more power.

This video from Fifth Gear compares the three cars to see which is the better performance machine. It is an older clip as the Boxster is a 987 generation car, but that means you can buy one of these cars on the used market at a fraction of the price.

Speaking of price, the Nissan is the cheapest among these cars, so you would think it would have a disadvantage. But, if it can hold its own to the other two then Nissan has created something very special.

The clip tests the sports cars on an obstacle corse, drifting and on the track. The most telling test is the track driving as it is simply seeing which car has a faster lap and is a more valid test. The other two are entertaining, but that is pretty much what they add up to.

So, which car do you think is the best? Let us know in the comments.