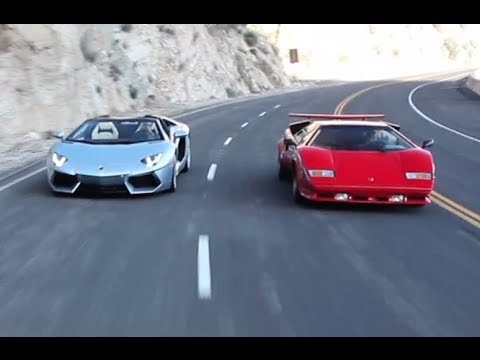 The Lamborghini Countach is the car that the term supercar was first coined for. When it was first introduced the Countach looked like something for outer space. But does the modern Aventador have the soul of the earlier high performance car?

Matt Farah decided to find out by driving the old school car right before the new school. The newer car is much more powerful and is very modern, but does it provide as good a driving experience as the car that first appeared in the ’70s? Watch the video below to find out.

This video is of us walking around the Pebble Beach Concours d’Elegance. It contains footage of historic racing 911s including a 935 and Martini Racing 911 RSR. Beyond the rear-engined race cars it also has footage of cars from the “Raging Bull”, including Miuras and a Countach. The quality of all these cars are top notch as is to be expected at Pebble Beach.

Check out the video and then let us know which car is your favorite in the comments below.

This past weekend’s Pebble Beach Concours d’Elegance had quite the array of cars. From new concept cars to some very special classic cars. This year’s event was especially big for Porsche, Lamborghini and Aston Martin as each had special anniversaries.

For Lamborghini it was a celebration of 50 years of the Italian supercar. To celebrate they had the Veneno concept at the event as well as the first Lamborghini concept car.

For Porsche it was a celebration of 50 years of the 911. Many historic and classic 911s were on display including the only known 901 prototype lest in existence. They also had the 50th anniversary edition 911 on display. Beyond the 911s the 918 Spyder was on display and showed the future direction of the companies technology.

For Aston Martin it was a celebration of 100 years of their sports car. The company had many vintage cars in the show. The also had a few concept cars at the event including the CC100 Speedster that was made to celebrate the companies anniversary.

Those are just a few of the great cars at this year’s event. There were too many to list, but we have posted a lot of pictures below. So, enjoy looking at all the great cars and let us know which ones were your favorite in the comments below.

Performance wise the Testarossa is a very good performing supercar that is actually a fairly livable car by supercar standards of its day. The above video features vintage car collector Joe Ventura talking about his love for this wonderful Ferrari and just what makes it so special. Joe is blessed enough to enjoy the car daily and he talks about how liveable the car actually is.

Prices of the Ferrari Testarossa are actually pretty modest now and someone can get into one for a fraction of other vintage Ferraris. Ferrari parts are always going to be expensive as is service, but if you find a well maintained example (and most are) and can afford the keep up you will have a great car that will get a lot of attention for years. Plus, your vintage Ferrari may start to increase in value as car collectors start to look at it as a great car made by Ferrari.