We’ve been waiting for the sixth generation Chevrolet Camaro to make its debut for a little while now. The 2016 car was supposed to make its debut this past Saturday, but it turned out that CNBC had other plans. The new version of the American muscle car was shown on their network a day before the planned debut.

The official unveiling happened on Saturday and the specs and model lineup where revealed. While not as major a redesign as some would have liked, the nip and tuck changes will be popular with anyone that liked the styling of the outgoing model.

Click past the jump (or scroll down if you came directly to the full article) to see a video of the Camaro team talking about the sixth generation car.

END_OF_DOCUMENT_TOKEN_TO_BE_REPLACED

McLaren has been very busy recently, working on new sports cars. In the past year (and a bit) they have introduced the P1, P1 GTR, 650S and 675LT To name a few. Not to bad for a company that only sells ultra high-end cars.

Well, those Britts are at it again and now they have teased the new McLaren 570S Coupe before it makes its debut at the New York International Auto Show. Details are limited, but the more “affordable” car from the company should be very good.

Click past the jump (or scroll down if you came directly to the full article) to learn more about the debut of the 570S.

END_OF_DOCUMENT_TOKEN_TO_BE_REPLACED

GM announced today that the date has been set for the reveal of the sixth generation, 2016 Chevrolet Camaro. The best part is that anyone can attend the event for free, but space is limited.

We’ve been driving a fifth generation 2015 Camaro SS 1LE for the past few days (a full review is coming on Thursday) and are looking forward to seeing how GM improves on it with the 2016 car. The outgoing car is quite a machine, so making large improvements will be a big task.

Click past the jump to learn more about how you can attend the debut of the 2016 Chevy Camaro.

END_OF_DOCUMENT_TOKEN_TO_BE_REPLACED 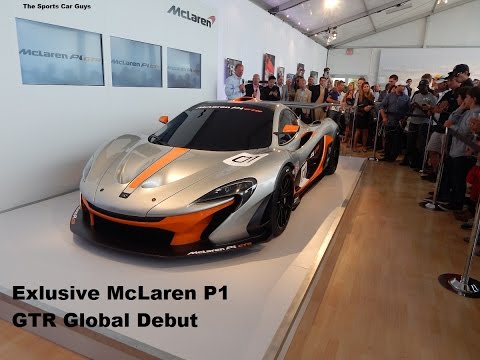 We were invited to the exclusive invite only world debut of the McLaren P1 GTR race car at Pebble Beach. The car is a P1 on steroids. It has a stripped interior, racing slicks, racing suspension and improved aerodynamics.

The hybrid race car will put out up to 986 horsepower, which should help it pass most other cars on the track. The car will also be extremely exclusive.

Just how rare a sight will a GTR be? Well, only 375 of the P1 road cars were sold and only purchasers of the road car can buy the P1 GTR. This will guarantee that it will be about as exclusive as a car can get.

People that buy a P1 GTR will get special sessions in the McLaren simulators used by the F1 racing teams. They will also get exclusive training to help then handle all that power.

We’ll have much more from the 2014 Pebble Beach Concors d’Elegance and Monterey Car Week over the next few days. Make sure you are subscribed to this blog so you don’t miss anything.

The Ferrari 458 Speciale will debut at the 2013 Frankfurt Motor Show in September. The special edition Ferrari is for those that would like a 458, but want something a little more special than the standard car. The car promises even better performance than the 458 Italia and has some styling differences that separate it from the standard car.

At first glance the Speciale looks the same as the Italia or Spider, but on further inspection you start to notice the design differences. The car has a more aggressive front end with the addition of cooling vents that help air flow and performance. The front fascia has been reworked and hints to the fact that this 458 packs an even bigger punch. There is also a racing stripe down the middle that makes it look like it would be at home on the track.

The interior is similar to the 458 Italia, but with more of a track feel. The car comes with track mats instead of carpet mats and has 458 Speciale labels on the dash. The suede seats feature a stylish colored insert that really sets off the track car feel.

The special edition Italian sports car features a V8 engine that puts out 596 horsepower at 9,000 rpms and 398 pound-feet of torque at 6,000 rpms. This equates to a 0 to 62 mph time of 3 seconds flat. It will rocket its passengers from 0 to 124 mph in just 9.1 seconds (just think of all the 80’s sports cars that would just be hitting 60 mph in that time). The power to weight ratio is very good with the car needing to move only 4.77 pounds per horsepower.

The pricing for the 458 Speciale is not available yet and will likely be released closer to the cars release.

If you like the looks of the 458 Italia (and who doesn’t), but want something with a bit more punch then the 458 Speciale should be a good option. The car looks more aggressive than the standard car, but still retains the basic lines of the Prancing Horse that we all fell in love with. Expect to pay quite a premium to get into one, but if you have the money it doesn’t look like you will be disappointed.

The 458 Speciale is the latest product of Ferrari’s core philosophy of extreme technological innovation and research which, in this instance, has yielded powertrain, aerodynamics and vehicle dynamics advances that transform the already exceptional 458 Italia into a car genuinely worthy of the “Speciale” moniker. The result is a completely new, uncompromising, streamlined sports car concept.

Many of the sophisticated solutions being applied for the very first time to an in-range car in the 458 Speciale, including its advanced active aerodynamics, will become a standard feature of all new Ferraris in the future.

Flanked in the Maranello marque’s range by the multi-award-winning 458 Italia and 458 Spider, the new mid-rear-engined V8 berlinetta was designed to boost both performance and driving emotion to unprecedented levels, yet simultaneously guarantee smooth, effortless control in all kinds of situations.

Having lavished meticulous attention on the power unit that was named “Best Performance Engine” at the International Engine of the Year Awards for two consecutive years, Ferrari has now built its most powerful naturally aspirated V8 ever (605 cv) with an extraordinary specific power output of 135 cv/l , the highest ever achieved by a road-going naturally aspirated engine.

Aerodynamic requirements guided the work of the Ferrari Styling Centre, which led the project in cooperation with Pininfarina, to sculpt the car’s forms to ensure they were more performance-oriented than ever. The most notable features in this sense are the front and rear movable aerodynamics which balance downforce and cut drag, thus helping make the 458 Speciale the most aerodynamically efficient range production car in Ferrari history (E Index of 1.5)

The technology used in the vehicle dynamics subsystems which gives the driver instant confidence and control at high speeds, natural power oversteer management and precise response to commands are further advances in an area in which Ferrari is already a well-established leader.

One of the most innovative content of the 458 Speciale is the Side Slip angle Control system (SSC) which makes it easier to achieve car control on the limit, thereby greatly improving driving emotions. Thanks to the development of an accurate new algorithm SSC performs instant-to-instant analysis of the car’s side slip, comparing it with the target value and then optimising both torque management (via integration with F1-Trac traction control) and torque distribution between the two wheels (via integration with the E-Diff electronic differential).

Part and parcel of the car’s development included Michelin Pilot Sport Cup2 tyres which were specifically honed for it in an intensive collaboration programme involving, amongst other factors, numerous track test and simulator sessions. Conceived for the 458 Speciale, they boost performance over a single lap in the dry as well as improving performance consistency in subsequent laps. They also allow the car to avail of maximum available grip in the wet.

The abovementioned technical content has improved the 458 Speciale’s single lap time and also delivers repeatability of that performance on subsequent laps that is absolutely unprecedented for a car not designed exclusively for track use. The result is that the 458 Speciale has the fastest response time (0.060 s) and highest lateral acceleration (1.33 g) ever achieved by a car in the Prancing Horse range.

The 458 Speciale will receive its public world debut at the Frankfurt International Motor Show in September.