Porsche and Ferrari are rivals, but how did it get to be that way? Most models are marketed to different segments, but from a performance stand point they are extremely comparable. We have made this documentary style video that covers the history of the two makes and just how they became rivals.

END_OF_DOCUMENT_TOKEN_TO_BE_REPLACED

Monterey Car Week starts in just over two weeks. During our yearly pilgrimage to automotive Mecca we will see unmatched vehicles driving around the California coast, being displayed in shows or crossing the auction block. Mecum has announced more cars that they will be in their auction lineup in Monterey and there are some extremely rare machines going up for sale.

The automobiles crossing the auction block include a Lamborghini once owned by George Foreman and a Porsche previously owned by Pete Sampras. All of the below vehicles are not likely to loose their value once purchased – providing the bidding doesn’t go too crazy.

END_OF_DOCUMENT_TOKEN_TO_BE_REPLACED

Selecting great cars is an exercise likely to provoke much heated debate amongst those who love their wheels.

Judging cars from different eras isn’t easy, and some people have their favourite marques in a field of names – both of manufacturers and specific models.

The very best evoke all kinds of images and feelings – not least the inspiration for teens to get up to speed and learn to drive for themselves.

Here are ten that, for various reasons, deserve their place in automotive folklore.

END_OF_DOCUMENT_TOKEN_TO_BE_REPLACED 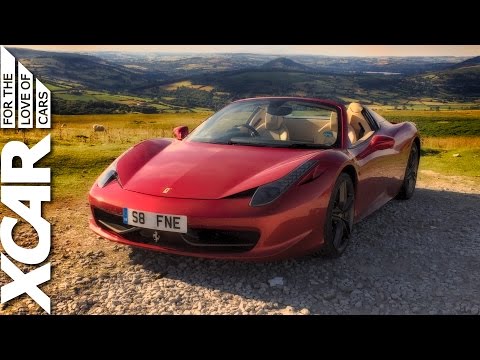 The Ferrari 458 Spider is a great mid-engined V8 open-aired sports car. The fact that it doesn’t have a V12 in it is something that owes itself to Enzo Ferrari’s son, Dino.

Dino sadly died at 24 years old, but before that he had worked on a smaller V6 engine for Ferrari’s racing efforts. After he passed away Enzo produced a car with a mid-mounted version of that same engine and it was sold as a Dino. Over the years a few models would go under the Dino name powered by a V8 engine and eventually these models and their concepts would be sold as Ferraris.

This led to cars like the F40 and eventually to the 458. In this video XCAR goes over the history of the V8 models and then they review the 458 Spider. They also talk about the possibility of a future turbocharged 458.