Our last questions was what type(s) of racing do you follow? Below are the comments that we found most interesting.

Each day we ask you a performance and/or luxury car question. After you submit your answers in the comments we post those that we think stood out most. Keep reading to see what you said to yesterday’s question.

END_OF_DOCUMENT_TOKEN_TO_BE_REPLACED

Monterey Car Week Has started and it all leads to the Pebble Beach Concours d’Elegance. For the event McLaren will be returning to the very popular concept lawn. On display will be a one-off McLaren 570S Coupe.

The 570S is the work of McLaren Special Operations (MSO) and an example finished in Ventura Orange and fitted with a selection of styling details from the MSO Defined range of options will make it to Pebble Beach. However, the model pictured above example that features a uniquely formulated Mauvine Blue paint finish coupled with a bespoke interior finished in Carbon Black leather with co-ordinating detailing, carried through from the exterior color will be the first car produced.

END_OF_DOCUMENT_TOKEN_TO_BE_REPLACED 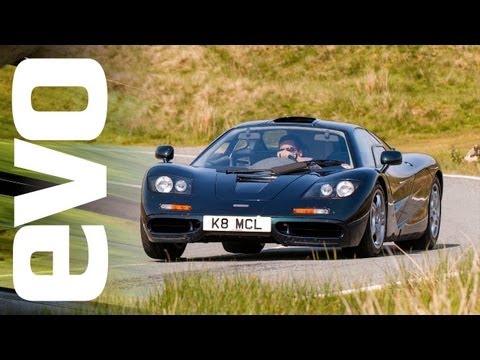 A Road Test and Review of the Best Pure Supercars Including the McLaren F1, Ferrari F40 and Porsche Carrera GT

Affordable is not how you would describe the Ferrari F40, F50, McLaren F1, Porsche Carrera GT, Noble M600, Pagani Zonda F and Lamborghini Murcielago LP670-4 SV. You can find a “cheap” Lamborghini, Ferrari or Porsche, but none of the above will be on any list of affordable cars. These are pure supercars that represent some of the finest analog cars ever made.

These days supercars have gone the way of technology. Just look at the McLaren P1, Ferrari La Ferrari and Porsche 918 Spyder to see how these technically advanced hyper cars use their hybrid systems to make incredible amounts of power.

These new supercars are equipped with advanced flappy paddle gear boxes, rear wings that help with down force and in many cases also help with breaking and they have more advances aerodynamics. They truly are technical marvels, but are they as engaging to drive as older supercars?

The last generation of supercars were very analog, connecting the driver to the machine in a very real way. In this video from evo they pit the best of the last generation of supercars against each other with one glaring exception. They didn’t include the Porsche 959 which would have been a good addition to the test, but the German performance car maker is still well represented with the Carrera GT.

Watch the video and let us know which one of these great supercars is your favorite.

Our Social Racing Page will Start with the Daytona 500

Are you a racing fan? If you answered yes to that question then you probably prefer one form of racing or another. Perhaps you enjoy endurance car racing, Formula One, Rally Racing, NASCAR or some other form of motorsport.

No matter which type of racing you prefer, chances are that you enjoy interaction with other racing fans. The great thing about the time that we currently live in is that you can easily connect with others on social networks.

We have decided to help make it easier for racing fans to connect with one another. We are connecting with Twitter to help bring conversations around racing together. Each week we will setup our new Social Racing page to show the conversation about the big race of the week. This should provide plenty of fun for the racing community.

You can go to the new Social Racing page here.

This Formula One season hasn’t been what Felipe Massa had hoped for when it started. Because of disappointing performances Ferrari will be looking to replace the Brazilian driver for next season. Because of this he is hoping to get a victory before the season comes to an end.

His first chance for a victory before the end of the season will be at the Japanese Grand Prix. For Massa the season has had a lot of frustration with various on track incidents making his races more difficult. If he wants to get a win before the season comes to an end then he will need to drive a near perfect race and hope for a bit of luck.

Let us know in the comments if you think Felipe Massa will be able to get a victory before the season’s end for Ferrari.

All sportsmen are born optimists and as Felipe Massa’s time with Ferrari comes to an end, the Brazilian told the media at his regular Thursday press meeting, here in a very hot and humid Suzuka paddock, that he still thinks about winning a race before the end of the year. “It’s a dream but anything is possible,” affirmed the Brazilian. “Anything is possible in this job: how many times have we seen a guy win a race without being in the best car. You never give up hope and I will try to get one more victory.” However, Felipe didn’t feel a win was essential to boost his cv as he talks to other teams about his future. “I think my experience matters more,” he said. “Everyone knows what I can bring to a team, especially at a time when everything will start from zero with new rules and I think I can bring a lot to a team.”

There are still four more rounds before we get to the Paulista’s home race, but the media are already quizzing him about what is bound to be a very emotional weekend. “It’s always very emotional for a Brazilian, but even more so in your last race for Ferrari,” he said. “I hope I can have a great race and a great result, but before then, I hope we can go well in all these last races.”

As to how Felipe will tackle the remaining race, one words sums up his attitude: aggression. “I will take an aggressive approach.” he said. “I did that in the last race, but unfortunately it didn’t pay off as I spun. But you need to take risks and I will keep trying.” As for the 2014 season and the new rule changes, Felipe shares concerns that the need to save fuel could turn races into an “economy run.” “Yes, it could be very frustrating to have to save fuel,” he agreed with the questioner. “Everything will be different, from the way you have to drive, the way you race and manage the car and how you use the fuel. I just hope it can be interesting to watch for the spectators and viewers and that it can also be interesting for the drivers. But we shouldn’t complain about something before we know how it’s going to be.”