Today Audi unveiled their new S4 and S4 Avant. The S4 is powered by a turbocharged direct injected 3.0-liter V6 engine. That equates to a healthy 345 horsepower output.

When you couple this to the 3,593 pound weight you get a 0-62 mph time of just 4.7 seconds. Flat out it can keep going all the way to the limited top speed of 155 mph. Plus, when you consider the performance, it pretty much sips on gasoline with the ability to get a very good 31.8 mpg.

END_OF_DOCUMENT_TOKEN_TO_BE_REPLACED

Today Aston Martin announced that their next car will be the DB11. The English automaker will debut the successor to the DB9 in 2016 and they teased the new performance car with the above badge rendering.

You are probably thinking that if the current car is called the DB9, why would Aston Martin call the next car the DB11? The answer can be found in the next James Bond movie, Spectre.

END_OF_DOCUMENT_TOKEN_TO_BE_REPLACED

Chris Harris Checks Out the Cars at Frankfurt

Chris Harris was at last week’s Frankfurt International Motor Show (IAA) and he was followed by a film crew to capture his thoughts on the latest cars. This video features Chris going through all of the most interesting cars from the car makers at the show. Highlighted are cars from Porsche, Mercedes, Jaguar, Ferrari, Lamborghini, Audi, BMW, and more.

Cars that Mr. Harris gives his opinion on include the Porsche 918 Spyder, 911 Turbo S, 911 50th Anniversary Edition, Ferrari 458 Speciale and Lamborghini Gallardo LP 570-4 Squadra Corse. One of the stars of the show for Chris was a Porsche that didn’t get a lot of attention. The car was a 917 race car that was overlooking the German performance car makers display and shows its racing heritage.

Check out the video and then let us know which car was your favorite in the comments. 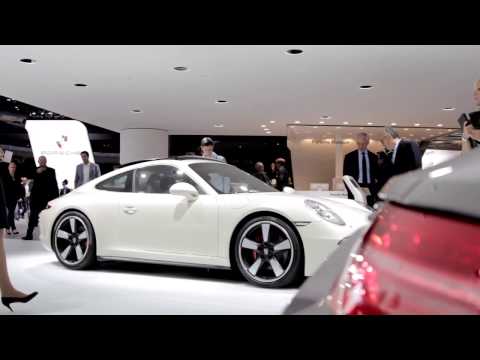 As most of you probably already know, 50 years ago the Porsche 911 was introduced at the Frankfurt Motor Show. To celebrate the anniversary the German performance car maker has released a 50th anniversary edition 911. The 991 based sports car features design elements from some of the past great 911s.

This video features 911 Designer Tony Hatter talking about the design of the special edition. He talks about the special design features that honor past greats. You can clearly see the resemblance of past cars from the rear boot that has the classic grill to the Fuchs style wheels.

Check out the video and then let us know what you think of the 50th Edition Porsche 911 in the comments.

The Acura NSX (Honda NSX in Europe) was at the Frankfurt International Motor Show (IAA). The hybrid supercar was on display along with Honda racing vehicles and high performance motorcycles. The original NSX was quite a car that showed the potential of a Japanese supercar and this new car looks to take it to even higher levels of performance.

The car will be powered by a V6 engine along with two electric motors to make high performance and good gas mileage possible. Styling isn’t as out there as many supercars, but having seen the car in person we can attest that it is still a good looking car. This video from evo shows the car at Frankfurt and goes over the known details of the new Japanese supercar.

Check out the video and then let us know what you think of the new Acura NSX in the comments.