For younger automotive enthusiasts and their parents insurance costs can dictate what type of car they are allowed to drive. When I was in college I had saved enough cash to buy an air-cooler Porsche 911 3.2 Carrera that was in well maintained very good condition.

I came home and told my parents that I wanted to buy it and my Mother talked me out of it mainly because of the insurance costs. Of course she also thought I would kill myself and my response of “at least I would die happy”, didn’t help the conversation go well.

END_OF_DOCUMENT_TOKEN_TO_BE_REPLACED 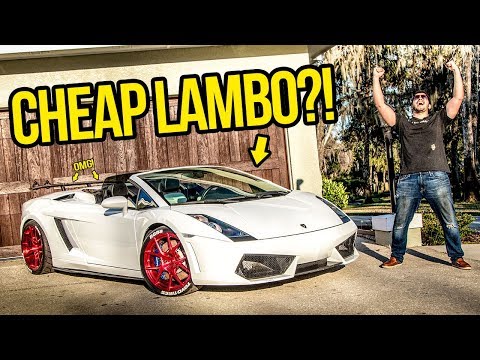 There really is no such thing as a cheap Lamborghini. Sure you may be able to find one for a relatively low price, but the cost to put it right will quickly add up.

Just how bad is it if you purchase something like a 2008 Lamborghini Gallardo for about $60K? Originally this car would go for over $200,000, but thanks to depreciation good examples can be had for a little under $100,000. This makes it quite the deal, but there was s a catch.

END_OF_DOCUMENT_TOKEN_TO_BE_REPLACED

This past weekend Lamborghini ran their single make Super Trofeo series in Indonesia. The weekend was filled with plenty of good racing action as fans saw examples of the supercar brand taking to the track.

Normally, the race event would be the big story, but that was not necessarily the case. The bigger story is the setting of a record for a parade with the most examples of a single car make. There were 51 Lamborghinis in the parade.

Now, I’m sure you are going to be quick to point out that there were more Ferraris at a recent Silverstone single make parade and that would be true. That is why there is a caveat to the record. It is the record for Indonesia and not for the world.

Still, seeing 51 Lamborghinis in one place doesn’t happen everyday and there were no complaints in the audience. Traditionally cars wearing the raging bull have not been raced, but one has to admit that they do look at home on the race track.

Desktop wallpaper of the Lamborghini Parade.

There are not that many V10 engines on high performance cars. V8s and V12s are much more common, although the V10 has been used in a few notable modern performance cars and trucks. Companies like Porsche, BMW, Ford and Lamborghini have all used a V10 engine in a higher performance vehicle.

Some of these are just incredible cars, so we have put together a list of the top 5 V10 powered sports cars.

The last Lamborghini Gallardo has been produced. The V10 powered sports car was the most successful car ever produced by the Italian sports car maker. Just how successful was the Gallardo? Well, of all the Lamborghinis produced since 1963, almost half of them are Gallardos.

The mid-engined car is more attainable than the V12 powered cars that the raging bull is best known for, but that doesn’t mean it isn’t still a very good car. The Gallardo is still very sought after and will get its owners some admiring looks. The car was available in many different variants, most of which offered even better performance that the standard car.

After ten years of production the Gallardo will be replaced by another “entry level” model. It will be interesting to see what car replaces it and if it is as successful as its predecessor.

Ten years of an Italian Icon
The ‘most sold’ Lamborghini super sports car
Still best in class with record lap times
Sant’Agata Bolognese, 25.11.2013 — In the historic factory buildings of
Sant’Agata Bolognese, the last Lamborghini Gallardo has left the production line. The final model is a Gallardo LP 570-4 Spyder Performante in Rosso Mars (red) and it is destined for a private collector. With a total of 14,022 units the Gallardo is not only by far the most-built Lamborghini, it ranks
among the most successful super sports cars — and has long since established itself as an icon of Italian design and the art of automotive engineering.

With its appearance ten years ago in the year of the company’s 40th
anniversary, the Gallardo marked a fundamental watershed in the history of
Automobili Lamborghini. In Lamborghini’s first four decades, an average of just 250 Lamborghinis were built per year. In the decade of the Gallardo, production grew to a whole new dimension with volumes of around 2,000 cars per year on average — while, in global terms, retaining the highly
exclusive nature of vehicles bearing the badge of the bull. In keeping with the
Lamborghini tradition, the name of the Gallardo too was derived from the
world of bullfighting. Bred in the 18th century, the Gallardo bloodline was
known for its exceptional courage and undaunted nature.

The great career of the Lamborghini Gallardo began in 2003 at the Geneva
Motor Show. Its unique, extreme design, created by the Centro Stile
Lamborghini, phenomenal dynamics and outstanding quality formed the basis for its enormous and enduring success over a whole decade. The Gallardo’s technical concept was compelling from day one: systematic lightweight design through an aluminum space frame; the combined power and highrevving characteristics of the ten-cylinder naturally aspirated engine; the
Lamborghini e-gear, a completely new robotized sequential gear shifting
system; and, finally, the amazing handling and safety provided by permanent all-wheel drive.

This notwithstanding, an enhancement in the driving experience was already
in the pipeline – the open-air driving thrill of the Gallardo Spyder, which joined the lineup in 2005. The Gallardo Superleggera came along in 2007. With its reduced weight, thanks to a large number of carbon fiber components, its
output increased to 530 hp and with its purist design, pushed the performance
benchmark yet another notch higher.

The second generation of the Gallardo arrived in 2008. With a redesigned
front and rear, a new engine with gasoline direct injection and 560 hp, plus further-enhanced equipment, the Gallardo LP 560-4 proved that even an
excellent product can be improved. The second-generation Spyder was also
delivered to its first customers in 2008. The new version of the Gallardo LP
570-4 Superleggera followed in 2010 with an increase in output to 570 hp, this time also as the open-top Gallardo LP 570-4 Spyder Performante. Occupying another niche in the broad spectrum of Gallardo versions were the LP 550-2 Valentino Balboni limited edition and the LP 550-2 Spyder: with their rearwheel drive, they appealed to a particularly purist group of sports car fans.

The pinnacle of sporting performance among the total of 32 Gallardo variants
was marked by the Super Trofeo Stradale and, finally, the Gallardo Squadra Corse. They draw a direct line from the competition version in the world’s fasted single-brand race series, the Lamborghini Blancpain Super Trofeo, to the road. The LP 570-4 Squadra Corse, in particular, demonstrated in several comparison tests just how outstanding the Gallardo still is. In specialist magazines from Quattroruote in Italy, through Car in the United Kingdom to Sport Auto in Germany, the Gallardo continued to prove right up to the end of its career that it was still the clear frontrunner in terms of performance, handling and driving pleasure, setting a best-in-class lap time in Hockenheim (Germany) and record lap times in Balocco and Vairano (Italy).

The Lamborghini Gallardo was sold in more than 45 countries across the
globe. In true Italian style, the Gallardo offered an exceptionally high range of
choices for individualization. Via the ”Ad Personam” program, each and every customer was able to have his Lamborghini V10 super sports car perfectly tailored to suit his own preferences. A whole decade of production also brought with it a wide array of special editions, often exclusive to specific markets, like the Singapore, Malaysia, China and India Editions. One
particularly exclusive version of the super sports car gained global
prominence through its very special service record: several units were built of the Gallardo Polizia Stradale with blue lights, special paintwork and dedicated equipment. Two are currently in service with the Italian State Police.

The Gallardo continues to prove its motorsport competence, racing in the
Lamborghini Blancpain Super Trofeo. Alongside European race tracks, this
fascinating one make series has now also conquered the circuits of Asia and
North America with its own series in those regions. The Gallardo GT3 has also celebrated numerous successes at sports car races around the globe.

In the year of Automobili Lamborghini’s 50th anniversary, the Gallardo success
story has now come to an end with car number 14,022. Almost half of all
30,000 Lamborghinis built since the company was first founded in 1963, are
Gallardos.