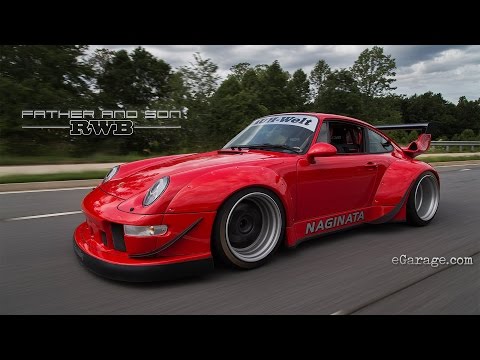 Leh Keen is a successful road racer who has driven many great racing machines. Recently, he has been racing Ferraris and before that he drove the legendary Brumos Porsche 911.

It should then be no surprise that he would be interested in something like a Rauh Welt Porsche. However, his father (McGrath Keen) was the first one to bring up the idea of owning a 911 Rauh Welt.

The 993 based tuned Porsche has a very unique look and is a race car for the street. It is fitting then that a racing family would add one of these stunning creations to their garage.

This video from eGarage shows Leh and McGrath Keen talking about how they came to purchase the 993 Rauh Welt Porsche. It also shows footage of the build by Nakai of RWB.

Watch the video below and then let us know what you think of the car in the comments. 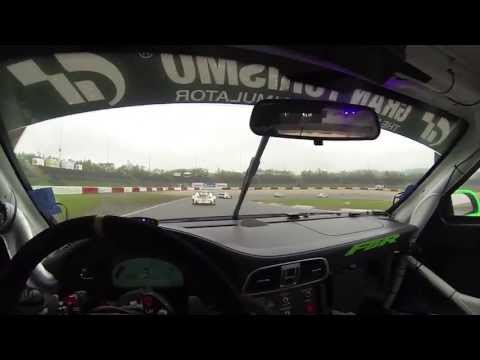 Leh Keen Driving a Porsche 911 GT3 R in the Rain

Earlier this year a video of racing driver Leh Keen driving a Porsche 911 GT3 R at the 24 Hours of Nurburgring was released. The video was called “Rain Dance” and showed Mr. Keen driving in some very wet conditions during the race. All of the footage was seen from his point of view.

Now a longer version of the video has been released. This time it features more behind the scenes footage from before the race include practice laps. Once again the entire video is shown from Leh’s view point and it features even more footage of him driving the 911 in wet conditions.

Check out the video and then let us know what you think of it in the comments.

The Grand-Am Rolex Sports Car Series season came to an end this weekend which also was the last race for the series before it merges with the American Le Mans Series. Coming into the final race both Porsche and Ferrari had a chance at both the GT class manufacture’s championship and the GT class driver’s championship.

For Porsche the hope was on the number 44 Magnus Racing Porsche 911 GT3 Cup car having a good race and getting enough points to finish ahead of the number 63 Scuderia Corsa Ferrari 458. Unfortunately, for them an on track incident kept them from having a very good finish. They were looking good enough for a podium finish but the incident forced them back in the pack and they ended up finishing 13th in the GT class. Finishing at all was an amazing accomplishment as the car was badly damaged in the incesent.

For Ferrari things worked out very well with the number 63 Ferrari 458 taking the class victory. For Porsche fans one of the winning drivers will be vary familiar as Leh Keen was on the winning team. Leh started the season driving the number 59 Brumos Racing Porsche, until Brumos decided to get out of the series. Mr. Keen had also won the championship in the Brumos car a few years back.

Let us know what you thought of the race in the comments.

Three Porsche customer teams entered four 911 GT3 Cup cars in today’s final GRAND-AM Rolex Sports Car Series race anticipating a dramatic two-hour, 45-minute GT fight for the championship. The GRAND-AM Championship Weekend at Lime Rock Park offered a three-way battle for the Rolex GT team, driver and manufacturer’s championships with Magnus Racing carrying the banner for the German marque. When the checkered flag flew for the final time over a GRAND-AM field, the teams had their dramatic race but fell just short of a title.

Magnus Racing’s championship aspirations nearly came to an end before five minutes had ticked from the race clock. John Potter (Salt Lake City, Utah), starting 11th in the GT class, was hit from behind by another GT class car on the second lap of the race. The contact resulted in the No. 44 spinning into the path of oncoming traffic. Now sitting sideways across the track, a GX class car made heavy contact to the nose of the Magnus entry doing substantial damage to the radiators and left front suspension. The team was able to make repairs and return the track with one-hour and 40-minutes remaining.

Despite being 61 laps down to the GT class leader, the impressive performance of the Magnus crew allowed Andy Lally (Dacula, Ga.) – making his 239th-career GRAND-AM start, more than any other competitor – to finish 13th. The points awarded for the position were just enough to give Magnus Racing second in the GT championship, one point ahead of Stevenson Motorsports.

“What a gutsy performance from the Magnus Racing Porsche crew,” offered Lally after the race. “Our car was destroyed; totaled; wrecked; done … But after Potter was punted off the track and then t-boned on lap two, the crew got to work, pieced this car back together and got me and John onto the track for 67 laps and a 13th-place finish. That effort gave me the required 30-minutes, Potter his 30 minutes, and made the difference between second in the championship rather than the fourth a DNF would have given us. This is the best crew is motorsports.”

Porsche finishes second in the manufacturer standings. The 357 points, just 15 behind Ferrari, came by virtue of the highest placing Porsche customer team in each race. Magnus Racing won one race (Mazda Raceway Laguna Seca) and had a string of consistently strong finishes while Park Place Motorsports earned three second-place finishes in 2013.

An eighth place finish by Mark Greenburg (Jamaica Plains, Mass.) and Porsche factory pilot Richard Lietz (Austria) in the No. 19 Muehlner Motorsports America Porsche was the best result for a 911 GT3 Cup car on the day. The run was made the more impressive as the program was not announced until just the day before on-track action began on the 1.5-mile Connecticut track.

Park Place Motorsports looked likely to close its rookie season with a fourth podium finish of the year. However, with just minutes remaining in the race, the No. 73 Porsche 911 GT3 Cup entry shared by Porsche factory driver Patrick Long (Playa del Rey, Calif.) and Patrick Lindsey (Santa Barbara, Calif.) was hit from behind by a Daytona Prototype (DP) competitor entering Lime Rock’s uphill chicane. Long pulled the damaged car to the side of the track dropping it from second-place to ninth in the final running order.

“Richard Westbrook came over and apologized to me, saying that he made a massive error and he was sorry,” said Long after the incident. “We had caught up to the number 31 Corvette, less than a second behind, but I don’t know if we could have passed them or not. I was hoping that, through traffic, and some advantage with braking, we might have had a shot to win. Still, this Park Place team has made a huge progression from the beginning of the year until now, and the crew has done a great job keeping us competitive against a very tough field.”

His teammate, Lindsey, continued: “We were in position for a podium at the end. With the on-track incident putting Patrick off the track at the end, we didn’t get that top finish, but we were competitive as we have been all season. I am very proud of the Park Place Motorsports team.”

Leh Keen is a endurance racing driver that is probably best know for his success in the Brumos Racing Porsche (although he has had other racing success driving cars such as Ferraris). Earlier this week Drive released a video of Leh driving his Porsche 911 GT3 R in the rain at the 24 Hours of Nurburgring. That video has gotten a lot of attention for the talented racer.

This video is an interview with Keen and talks about his racing experience as well as the “Rain Dance” video. In watching the video you get a lot of insight on what it takes to be a professional racing driver. You also learn more about Leh and get a feel for his personality when not driving.

Leh Keen Driving His Porsche At The Nurburgring

This last weekend was the running of the 24 Hours of the Nurburgring and the rainy conditions made it difficult for the drivers. One of the drivers was Leh Keen. He was behind the wheel of a Porsche 911 R for the famed 24 hour race on one of the world’s most famous tracks. The conditions were so bad that their was a 9 hour red flag stop to the race.

This video captures Leh driving the 911 race car around the track in some pretty slick conditions. This footage was taken just before the red flag came out. The video shows all the skill that is required in this tough race and how dealing with driving in the dark while it is raining can be very difficult for a driver.

There is no music or talking in the video, just the sound of that wonderful flat-six engine. If you are a racing fan or a Porsche enthusiast (or both), you’ll definitely want to check out this footage.