American horsepower or German engineering? That is the question that Motor Tend asks when comparing a 1968 Porsche 911L Targa with a 1967 Chevrolet Corvette 427. Both classic cars are great in their own way, but which would you rather have?

In this video they compare the two cars on some nice roads along the California Coast. The Corvette has a lot of power, but has poor steering and the 911 doesn’t have quite the performance, but has incredible steering feel.

But is comparing these cars even fair? The 911L wasn’t the pinnacle of the Porsches, where the 427 is considered by many the best Corvette ever. Perhaps from a strict performance stand point the 1967 Corvette 427 should be compared to the 1973 Porsche 911 Carrera RS 2.7.

Watch the video and then let us know what you think of the two cars and if they chose the correct cars to put against each other. 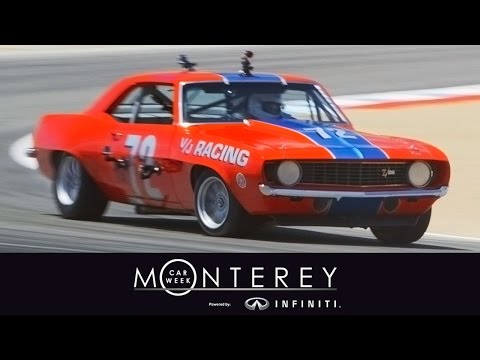 As part of Monterey Car Week Motor Trend is having a week of videos featuring classic cars. The most recent video is from their J-Turn program which features Jessi Lang driving an original 1969 Canaro Z/28 Trans Am race car.

For those who aren’t huge Chevy guys this car is just insane. It puts out 500 horsepower and yet it has brakes that are unassisted and steering from a area long past.

This video features Jessi taking two hot laps in the car. Unfortunately, she wasn’t able to drive it longer because the exhaust system was louder than allowed at Laguna Seca.

Jessi has been recovering from an accident on the Autobahn that left her pretty much stuck in bed for a while. She is still recovering but it is good to see her able to get back behind the wheel.

As part of Monterey Car Week Motor Trend is having a week of classic car episodes on their most popular YouTube programs. The first of these shows is Ingnition and in the special episode it features a 1967 Maserati Ghibli.

The Ghibli is often compared to the Lamborghini Muria and Ferrari Daytona. However, those two cars are V12 powered machines that are closer to pure sports cars and the Ghibli is a V8 GT cruiser.

The Maserati is more relaxed than its Italian cousins, but it still has a nice feeling when driving it and has a great sound. It won’t be the king of the drag racers, but it will get you places in style and comfort.

Watch this video with the 1967 Ghibli and learn a bit more about this car and what it is like to drive. One of the best things is it is possibly the most reliable high-end Italian sports car from its era.