The prototype of the next generation of the Acura NSX has already been to Pikes Peak. However, it hasn’t made a high speed climb yet, instead being used as the pace car.

Now that the hybrid supercar is in production two specially prepped 2017 Acura NSX Time Attacks will make the climb up the side of the mountain. The cars will compete in the Time Attack 1 and 2 classes and will be driven by brothers James and Nick Robinson.

END_OF_DOCUMENT_TOKEN_TO_BE_REPLACED

The 93rd running of Pikes Peak will happen this weekend and the new Acura NSX will be he official pace car for the yearly hill climb. The supercar will make climb up the hill aided by its turbocharged V6 and hybrid drivetrain.

The pace car will lead the 140 entrants to the top of the mountain. For the event a special livery was chosen for the new NSX that is race inspired based on the competition car pictured above.

For more about the Acura NSX and Pikes Peak click past the jump (or scroll down if you came directly to the full article).

END_OF_DOCUMENT_TOKEN_TO_BE_REPLACED

This weekend is the 93rd running of the Pikes Peak International Hill Climb. One of the many vehicles that will tackle the challenging of driving up the side of the mountain is a Scion FR-S.

Now the road going FR-S (or Subaru BR-Z for that matter) is a fun to drive sporty vehicle that many feel would be just incredible with a bit more horsepower. The purpose built machine that will make the climb is a Mackin FR-S that was first shown at SEMA. Besides the needed safety equipment there is something that we would like to see in a production FR-S sitting under the hood.

Click past the jump (or scroll down if you came directly to the full article) to find out more about the Mackin FR-S and the driver that will take on Pikes Peak.

END_OF_DOCUMENT_TOKEN_TO_BE_REPLACED

Pikes Peak is one of the toughest hill climbs in the world. It is a challenge for both man and machine to quickly drive the winding roads up the side of the mountain to the very thin air. Because of the low air density many engines struggle to breathe at the higher elevations.

This helps make it a perfect proving ground for new automotive technology. The HPD ARX-04b,which debuted at the 24 Hours of Daytona and is powered by a Honda engine, will attempt to tackle the tough mountain challenge this year.

To read more about the HPD ARX-04b, its power plant and Pikes Peak click past the jump (or scroll down if you came directly to the full article).

END_OF_DOCUMENT_TOKEN_TO_BE_REPLACED 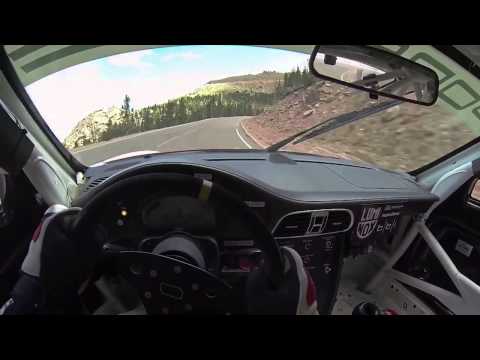 At the 2014 running of Pikes Peak, Jeff Zwart brought his Porsche 911 GT3. Because of the high altitude the GT3 has been turbocharged. This helps the engine keep more power as the air gets thinner.

This video features Jeff’s run at the event from this year. The footage is taken from his point of view as he climbs the hill.

The run was a pretty good one putting him just off of the first place car. That is pretty good when you consider that shortly after starting the run he had fuel pump issues.

Watch the run and then let us know what you think of it in the comments.