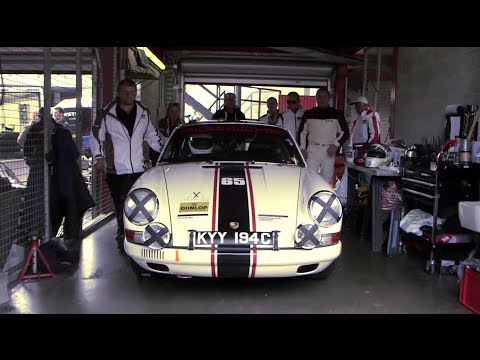 Not that long ago we posted a video about Project 50 and the qualifying for their final race at Spa Francorchamps. You may remember that Project 50 is about racing a vintage Porsche 911 in historic races to celebrate 50 years of the rear-engined sports car.

In the last video that we posted you may recall that the 911 had engine problems during qualifying. That video ended showing that scene and this one shows highlights from the actual race. It also lets you know if they were able to get the car back on the track for the race or not.

Check out the video and then let us know what you think in the comments.

Yesterday, we posted a video about Project 50 taking their early Porsche 911 to Spa Francorchamps. That video showed their arrival for the 6 hour historic endurance race.

The participation in the race is a way to celebrate 50 years of the 911 and what a fitting way to do so. After all the rear-engined sports car has been a very successful racing machine.

This video shows the Project 50 team qualifying at Spa. It shows footage of the car being driven on the track and features commentary by the drivers and team members. The team did have an issue in qualifying, so there should be a followup video to show how this turned out.

Check out the video and then let us know how it all turns out in the comments.

The long wait for Formula One fans is almost over. After about a month of waiting the eleventh round of racing is almost here. The race will be the Belgian Grand Prix held at Spa-Francorchamps.

During the first free practice it rained on and off. This weather is likely for race day, so teams are preparing for the bad weather. In the practice session Ferrari’s Fernando Alonso was the fastest driver of the day. His teammate, Felipe Massa, was the 10th fastest in practice.

The likely wet weather should make for a difficult, but entertaining race. Let us know who you think will win in the comments.

There was quite a wait for the eleventh round of the Formula 1 World Championship to get underway this morning in the Ardennes. The typical Spa-Francorchamps weather did not disappoint and intermittent rain fell throughout much of the first Free Practice session. Fernando Alonso was fastest overall in 1.55.198, only completing 11 laps, while in the other F138, Felipe Massa was eleventh, doing 10 laps with a best time of 1.56.863. When conditions allowed, much of the session was dedicated to evaluating different aerodynamic configurations. The two Ferrari men ran Intermediates, then Hards and then Intermediates again, also trying some practice starts before the end of the session. Behind the Spaniard, it was Force India that completed the top three: Paul di Resta second in 1.55.224, ahead of Adrian Sutil who did a 1.55.373.

This weekend is the Spa 24 Hours and Sarah Bovy will be the first woman to race an Aston Martin when she drives a Vantage GT3. While this is the first time she will be racing in the Vantage GT3, she is no stranger to the 24 hour endurance race as this is her third time running in the race. She will race with her teammates Michael Scmhetz, Pierre Grivegnée and Bert Redant.

The car is one of two entered by Aston Martin Brussels and is run by the Belgian Pino Sperlinga’s team GPR. The race will have a pretty full field with over 70 cars entered for the endurance race. Sarah will be driving in the number 89 Aston Martin and will compete in the PROAM class.

We will be watching to see how Sarah and the team does in the race. Let us know what you think of her racing for Aston Martin in the comments below.

Sarah Bovy will be the first woman to race the Vantage GT3 when she takes part in the Spa 24 Hours this weekend.

Bovy will be diving one of two Vantage GT3s entered by Aston Martin Brussels and run by the Belgian Pino Sperlinga’s team GPR in a field of more than 70 cars. It will be the third time she has competed in the 24 hour race and this time she will drive alongside Michael Schmetz, Pierre Grivegnée and Bert Redant in the number 89 car in the PROAM class.

“Of course, I’m proud to wear Aston Martin colours and to achieve something that no other woman has done before,” said Bovey. “I think I can learn a lot from the most experienced drivers in the team and at the same time I know I will find my place and will have the opportunity to prove myself behind the wheel.”

When the Total 24 Hours of Spa is run later this months ten McLaren 12C GT3s will be driving in the race. One of the racers will be Chris Goodwin, McLaren’s chief test driver. He will be racing with the Von Ryan Racing team and will join drivers Rob Barff and ex-Formula One driver Bruno Senna. To make things a bit tougher at this year’s race the team will move into the GT Pro class.

Last year the team managed a very good fourth place finish in the 24 hour endurance race. However, this hard fought finish was in the Pro-Am class, so moving up to the higher class will give them a much harder test. None the less they believe that they have the car and drivers to move up to a podium finish.

You never know what may happen in an endurance races, but we will know how they finish later this month.

The 2013 Total 24 Hours of Spa will see a grid of at least 10 examples of the McLaren 12C GT3 later this month, with McLaren GT customer team Von Ryan Racing returning for a second consecutive year, moving into the Pro category for the first time. The driver line-up will see McLaren Automotive chief test driver Chris Goodwin return to the team, having contested the headline event of the Blancpain Endurance Series last year, and he joins team regular and former teammate Rob Barff and ex-Formula 1™ driver Bruno Senna.

Goodwin returns to the cockpit of the striking #88 McLaren for the Total 24 Hours of Spa, in which he and Rob Barff claimed a hard-fought fourth place in the Pro-Am category on the first attempt, less than 30 seconds off a podium finish after a gruelling 24 hours. For this year’s assault, the team is again led by former McLaren Formula 1 team manager Dave Ryan, with the support of Leon Price and Dragon Racing, and sees Goodwin and Barff reunited and joined for this one-off round of the Blancpain Endurance Series by Bruno Senna as part of his continued GT drive programme for 2013.

The driver line-up is particularly special for Chris Goodwin, who has managed Bruno Senna’s career, starting in junior racing and through seasons in Formula 1™. Commenting on the line up for the Total 24 Hours of Spa, Goodwin explained: ‘It is a fantastic opportunity to tackle my favourite race again with Von Ryan Racing, and it’s great to be back in the car sharing with Rob Barff. He has been racing with the team throughout the season, and has been one of the quickest and most consistent drivers on the grid. Of course, I’m really looking forward to racing with Bruno as well. We have worked together for many years now, but we have never actually driven together before so this will be a new experience for both of us. I’ve watched him race at Spa many times in GP2, Formula 1™ and in GT cars, and know how quick he can be. It should be a fun weekend!’

Commenting on joining the team, Bruno Senna explained: ‘I have really enjoyed the experience of racing in GTs so far this season, but this will be my first race in a McLaren. Obviously it is a brand that my family has close links with, and I am really honoured to have the chance to have the opportunity to race the 12C GT3 in the 50th year of the team. I am really looking forward to racing with Chris as well. We have worked together for a number of years, and it will be a lot of fun to race alongside him, and with the Von Ryan Racing team we hope to be able to get a strong result after 24 Hours at one of my favourite race circuits.’

Rob Barff, who has contested the opening three rounds of the Blancpain Endurance Series with Von Ryan Racing this season, explained: ‘The Total 24 Hours of Spa is a truly incredible event. It is the ultimate test of a car and a team in terms of durability and endurance, and we are using it as a way of showcasing the trackday operation in the Middle East run by Dragon Racing. I am very much looking forward to teaming back up with Chris after our strong result last year, and the addition of Bruno as our third driver puts us in a really strong position. An all Pro driver line-up is something new for the team, and the opposition is truly world class, but I am optimistic we can mount a credible challenge.’