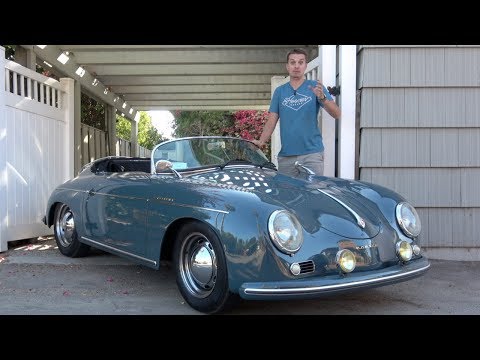 An original Porsche 356 Speedster will cost you over $200,000 in good condition. This puts it well out of the reach of most enthusiasts.

Because originals have continued to skyrocket, it has opened a market for replicas to be built. These cars feature a fiberglass body on a chassis from a Volkswagen Type 1 and powered by an air-cooled VW flat-four engine.

END_OF_DOCUMENT_TOKEN_TO_BE_REPLACED

We recently, announced a new column on this publication called “Reader’s Rides”. In each article, we will be sharing a cool ride sent to us from one of our readers. The hope is that this will allowing our community to get closer together.

At the end of each week we will select a few of the rides that appeared during the week and let you tell us which ride you liked best.

Today we have this Supercharged 1994 Porsche 911 and this Porsche 356 Speedster.

END_OF_DOCUMENT_TOKEN_TO_BE_REPLACED

We recently, announced a new column on this publication called “Reader’s Rides”. In each article, we will regularly be sharing a cool ride sent to us from one of our readers, allowing our community to get closer together.

Today we have this beautiful Porsche 356 Speedster.

END_OF_DOCUMENT_TOKEN_TO_BE_REPLACED

On June 8th, 1948, the Porsche 356 “No. 1” Roadster received its operating permit. Thus was produced the first sports car that led to vehicles that would set the bar that all other sports cars are measured by.

While the very first Porsche was a mid-engined vehicle, the later 356 models and the 911 would have there engines in the back (although some of Porsche’s successful road and race machines would use a mid-engine layout). With 70 years of history Porsche has made a number of legendary machines.

Cars like the 356, 911, 550 Spyder and 917 are just a few that come to mind. Their cars are so good, for their time, that even Porsche’s less loved models would be the crown jewel in just about any other automaker’s lineup.

To celebrate 70 years of Porsche the German automaker has unveiled a new 911 Speedster Concept car. The special 911 is a modern machine, but incorporates styling elements from various automobiles from its storied past.

END_OF_DOCUMENT_TOKEN_TO_BE_REPLACED

The Mazda MX-5 Miata has always been a pretty light weight car. While it is very heavy compared to Lotus standards, coming in at just 2,332 pounds, it is about 500 pounds lighter than vehicles like the Subaru BRZ.

But what if it was even lighter? The folks at Mazda decided to find out what the result would be, so they built the MX-5 Miata Spyder and Speedster concepts. Both vehicles will be on display at SEMA starting on November 3rd.